Building an App for our Readers and Food Bloggers

Since 2016 we’ve been working on something alongside Super Healthy Kids to make the internet of recipes much better for our readers, while also providing food bloggers like ourselves a way to generate a stable income stream based on the amazing recipe content they create.

By now you’ve probably heard of Prepear which is the app we’ve been building to help you organize your recipes, do your meal planning, and order your groceries all in one place.  Way back in 2017, we filed for a trademark for our Pear logo, and finally last fall after years of waiting we received notice from the US Patent and Trademark Office that our logo had been provisionally approved and found not to be in conflict with any other trademarks.

Apple Comes After Our Logo

We applied to trademark our logo in 2017. Fast forward to 2020 when we finally thought we were in the clear, we received an official 352 page opposition notice from Apple (yes, 2 trillion dollar Apple).

Apple is demanding that we change our obviously pear shaped logo, used to represent our brand in the recipe management and meal planning business, even though our logo doesn’t look anything like theirs and we aren’t in the same line of business at all. Here’s exactly what Apple is saying: 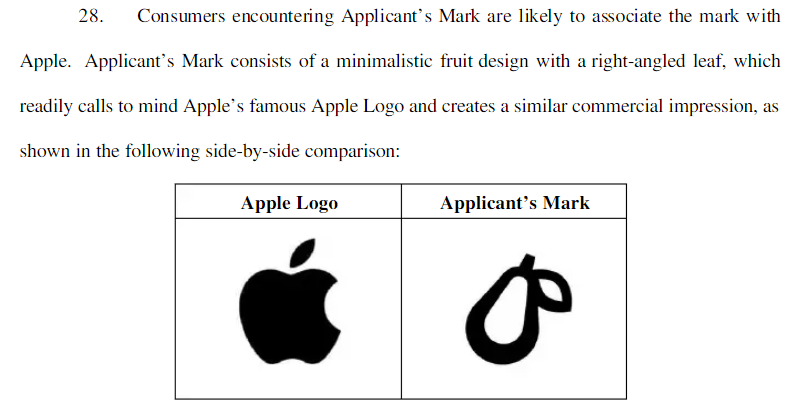 What do you think, have you ever logged into Prepear, seen our logo, and been confused, wondering if Apple made Prepear?

Fighting Back Against a Bully

Our first reaction to the news that Apple was going to fight us over our trademark was disbelief. We naively thought that there must be more going on here than is written in Apple’s opposition because it clearly doesn’t resemble their logo at all.

As we started looking into it and communicating with Apple’s lawyers we discovered that there was really no deeper issue other than their ridiculous claim that our logos are confusingly similar.

Worse, we discovered in a quick search of trademark filings that Apple has been repeatedly going after dozens of other small businesses, forcing them to pay for a very expensive legal defense, or abandon their trademarks, even though their logos don’t even resemble Apple’s at all and they aren’t in the same line of business. It appears that Apple is simply coming after anyone with a fruit based logo, or with a leaf attached to their logo.

Since it costs tens of thousands of dollars to defend a trademark opposition in the US, and Apple literally has tens of billions of dollars of cash in the bank, it is no problem for them to just go after dozens of trademarks that aren’t even like their own. Unfortunately most small businesses just can’t afford to defend against this type of litigation, so they either close their doors or change their logos and the bullies win.

At Super Healthy Kids we want not only to help parents raise kids with healthy eating habits, we want to help parents raise kids with healthy social and emotional habits. That includes teaching our kids to be willing to take the risk to stand up for injustices they see in the world, to help a kid bullied at school, or to take a stand for what they believe in even if they might not look cool, it might take time from what they really want to do, or in our case it might cost money.

We are fighting back against Apple to protect our right to our own distinct logo, to help send a message to big tech companies that bullying small businesses has consequences, and to set an example for our kids that when they see someone bullied, or are bullied themselves, that there is something they can do about it. It won’t be easy, but doing the right thing is always worth the cost.

We went public in our fight against Apple by starting a petition requesting that Apple drop its opposition of the Prepear logo, and stop bullying other small businesses with fruit logos.

News Coverage in our Fight Against Apple

What started with a small group of our friends and family signing and sharing the petition, turned into global news coverage within a few days and generated over 77,000 signatures.

Hundreds of thousands of people felt extremely passionate about taking a stand against Apple’s aggressive legal actions towards small businesses.  This passion was represented by the hundreds of news articles, Youtube videos, and social media posts created and shared all over the world.

These are just a few of the news articles that were written covering this issue.

Inc.com: “Apple Just Did the 1 Thing No Brand Should Ever Do”

Business Insider: “A five-person startup says Apple is ‘bullying’ it over its fruit-shaped logo”

Entrepreneur: “Apple Sues Small Business With Pear Logo Because ‘People Can Get Confused’”

Apple’s Response to the Petition

We were overwhelmed by the incredible support we received in response to the petition and the news coverage of our situation. We received hundreds of messages of support, offers for free legal services, and most of all an affirmation by hundreds of thousands of people that nobody encountering our logo is confused or associating our recipe management and meal planning app with Apple.

We thought that this level of support from consumers, and the clear lack of confusion experienced when hundreds of thousands of people saw our logos side by side would cause Apple to drop their case against us.

Through discussions between our attorney and Apple’s legal team, we learned that not only would Apple be continuing their opposition to our logo, but worse, they had taken additional steps in preventing our logo from being registered as a trademark by filing an additional opposition against our trademark in Canada. This will increase the cost of the defense of our logo, and is a clear sign that Apple is doubling down on their fight against all fruit.

It would be easy to think that this is just lawyers being lawyers, and that the rest of Apple doesn’t agree with this sort of bullying behavior, so we reached out to Apple’s PR team sharing the petition and requested to discuss the situation, and received no response. Apple has also ignored the dozens of reporters who reached out to them for comment.

This is not just Apple’s lawyers being lawyers, it appears that the organization at Apple stands behind its lawyers. As is the case in all bullying, silence about the behavior of the bully is the same thing as support.

Why Don’t We Just Change Our Logo?

It seems like this is all a lot of work, emotion and energy to put into something, when we could just change our logo and call it a day right?

Wrong.  We have of course considered changing our logo instead of having to go through a long drawn out legal process with Apple.   Here are the reasons why we aren’t going to do that:

We feel a moral obligation to take a stand against Apple that sends a message to big tech that you can’t bully small businesses without consequences. We own our intellectual property, Apple doesn’t have a right to just swoop in with their expensive lawyers demanding we change design elements of our branding that have nothing to do with them.If we were to change our logo, it would cost us hundreds of hours to go through every single place where our current logo has ever existed and change it out for the new logo.  Because our team is small, hundreds of hours means our design and development teams would be losing out on months of work improving our product for our users. We’ve spent years building a brand around Prepear. Our customers recognize our logo, and it means something to them. Changing a brand or logo can cause confusion and a loss of trust from our customers.What would we change it to? Apple has been so aggressive in its opposition filings on other logos that it is hard to imagine a design that they wouldn’t object to. Move the leaf to the left side? They’ve opposed other logos with that. How about no leaf? They’ve opposed other logos with that. Switch it from a pear to an orange and change our name too? They’ve opposed orange based logos. Switch from a minimalistic design to a realistic pear? They’ve opposed realistic pears in unrelated industries before ours. We could provide dozens of more examples.

It’s clear that somebody just needs to stand up to them.

How you can help

We have had an overwhelming response from people asking what they can do to help us.  We have been asked if we have a Go Fund Me or similar campaign setup to help us raise funds.  We do not have plans to set up anything like that, although fighting this legal battle will cost us tens of thousands of dollars.  We are truly more interested in growing our business to be in a better position to fight Apple.

So here are some ways that you can help:

Sign our petition requesting Apple drop this case.Share this post and the link to the petition on your social media accounts and with your friends and family. The more people who are aware of Apple’s bullying, the more likely they are to stop this behavior.Download the Prepear app and leave us an honest review on either Google Play or the Apple App Store. These reviews mean the world to us and help others discover Prepear. Use the app!  We built Prepear to help people have an amazing cooking experience with digital recipes and hopefully create better health and cooking habits for themselves and their families. Consider upgrading to Prepear Gold.  If you are interested in contributing to this cause financially,  signing up for our subscription is a great way to do that while also helping a small business like ours grow.Teach your kids how to stand up to the injustices they see in the world, and show them by your example how you do it. The more people who stand up for what is right, the better future we will all have for our kids!