You can absolutely make homemade bouillon. And I know you can thanks to Pam Corbin. Pam wrote the lovely River Cottage Preserves Handbook.* In the very back of this exquisite little book, long past the rhubarb relish, and well beyond the piccalilli and winter fruit compote, she proposes a simple idea: make your own bouillon. I’m not sure why this never occurred to me, but until I reached page 207, it hadn’t. She outlines a list of ingredients that are pureed into a concentrated paste of vegetables and herbs, preserved with salt. I’ve been cooking with a version of it all week, and it is infinitely better than any canned vegetable stock I’ve tasted. And the best part about it? You can build on the general idea and tweak it based on what is in season and my own personal preferences – which is what I did.

Technically, a bouillon cube is a dehydrated cube or powder used to create an instant vegetable stock. Pam calls her version “souper mix”….but you use it in a way similar to bouillon cubes. It is used to make quick, flavorful broth. For example, when cooking soups, risottos, curries, whatever really. 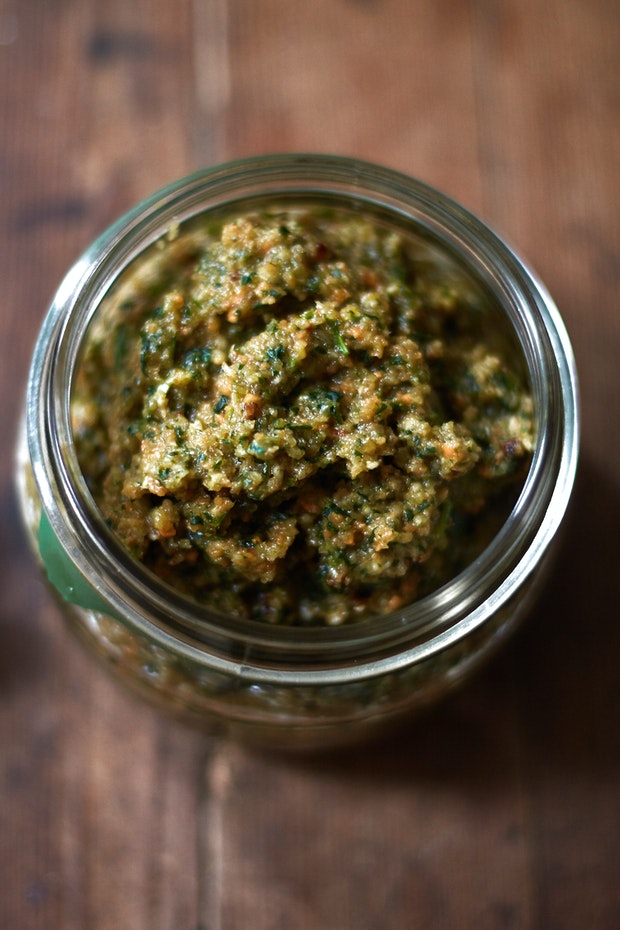 The main thing? Keep in mind bouillon is quite salty and very concentrated. I mention in the recipe I’ve been using 1 teaspoon per 1 cup of water/liquid to start. You can adjust from there based on what you’re making and personal preference. And as far as variations go, this first batch was made primarily with ingredients from my refrigerator, but I’m really excited to try other versions using different herbs and ratios of the base ingredients. In fact, if you have any suggestions or ideas give a shout in the comments – I’d love to hear them!

A number of your variations caught my attention, so I thought I’d highlight a couple here. Love these!

Karen “tried a variation with local ingredients: carrot, long onion (like a leek), daikon radish, japanese wild parsley, salt, and 7 pepper blend. added a bit of soy sauce for more salt and flavor, too. then i used it to make red lentil soup. WOW! the soup never tasted so good!!!”
Dominican Foodie liked the texture of the version she made noting, “I made a couple of changes to your recipe. I doubled the ingredients (except salt and tomatoes) Added extra garlic and white onions, juiced the first half (set aside), tossed the second half in olive oil and roasted for two hours, then tossed everything into a large deep pot, added bay leaves and simmered until liquid was reduced by half. Took out bay leaves, stuck an immersion blender in the pot and smoothed everything out into a paste. Perfection!”

*The U.S. edition of the River Cottage Preserves Handbook is now available.

There is a whole directory of great soup recipes where you can put your bouillon to use!