These raspberry wholegrain sweet rolls are ooey gooey perfection and, to be honest, taste just as good or better than sweet rolls made only with white flour!

It can be difficult to get homemade whole grain baked goods as soft and fluffy as using bread flour or all-purpose flour.

The reason whole wheat baked goods are so dense is because whole wheat flour contains much less gluten compared to all-purpose and bread flour. Gluten is important for the structure of the dough. Without them, baked goods tend to end up flat and tight.

Use vital wheat gluten in your recipe. It’s like a super-charged flour, mostly made up of only gluten, adding elasticity and texture to your dough. Add one tablespoon of vital wheat gluten for every 2-3 cups of flour in your recipe. You can find it at most grocery stores or on Amazon. Add all-purpose or bread flour to your recipe. Just a little white flour gives it enough gluten to give the dough a better structure. Let your dough rest for about 20 minutes before kneading it. This will give the flour time to absorb the water and soften the whole grains. Add one of these ingredients to your recipe for a softer texture. Potato flakes, honey, milk (replace some water) and butter. 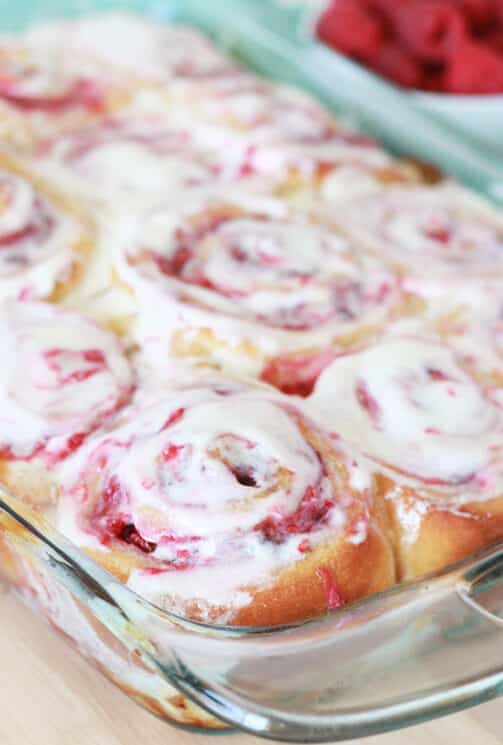 It’s also good to experiment with different whole wheat flours. Fortunately, my town is famous for being the home of Lehi Roller Mills (famous for filming Footloose there !! Do you remember that great movie?). They literally have the best whole wheat flour. If you keep getting a dense and heavy product when making whole wheat bread and rolls, try different types of whole wheat flour until you get the texture and density you want.

How to make the raspberry filling

I like to use frozen raspberries for this recipe. They keep their texture better than fresh, and fresh usually makes way too much juice and can make your sweet buns moist. Plus, you can make these with frozen vegetables any time of the year, even when raspberries are out of season!

Filling is incredibly easy. Just stir your cornstarch, sugar, and raspberries together until coated. Then you can spread yourself on your dough!

The sweet rolls need to rise in the pan, and as they rise the raspberries release their juices. This is actually a really good thing !! The bottom of your pan starts to glow with sweet red raspberry juice. The juice is absorbed during baking and turns into an incredible sticky raspberry icing. I was afraid it would make the buns moist, but it didn’t at all! 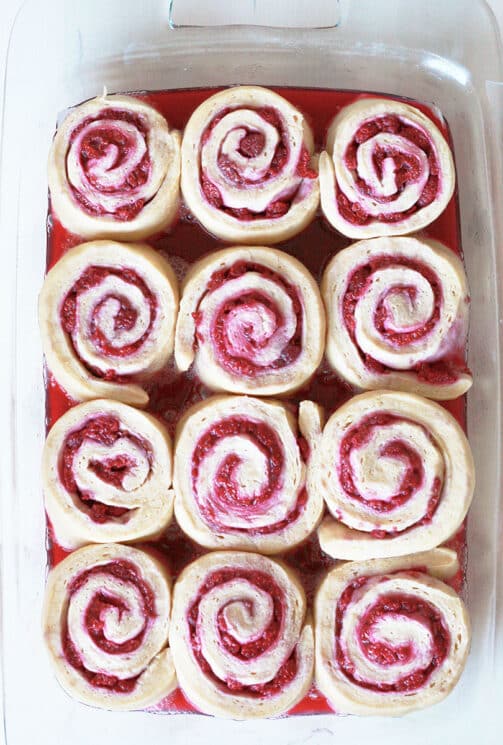 How long should I let my raspberry buns rise?

The ingredient that makes the bread rise is yeast. If you use commercial yeast, it will feed on sugar and release carbon dioxide and alcohols. This causes air bubbles to form in the dough and the dough rises.

The rise times in a recipe are specific to what you are making, so your final product will be deliciously fluffy with an amazing taste. If you let your bread rise too long, it will create too many bubbles. Too many bubbles mean the bread will become very porous, dry, crumbly in texture, and have lots of large holes. It can also change the taste of your bread. Yeast releases alcohols during the ascension process. When done for the right time, the bread will acquire a nice, earthy taste. If left to rise for too long, this aroma becomes very strong and can even taste sour. 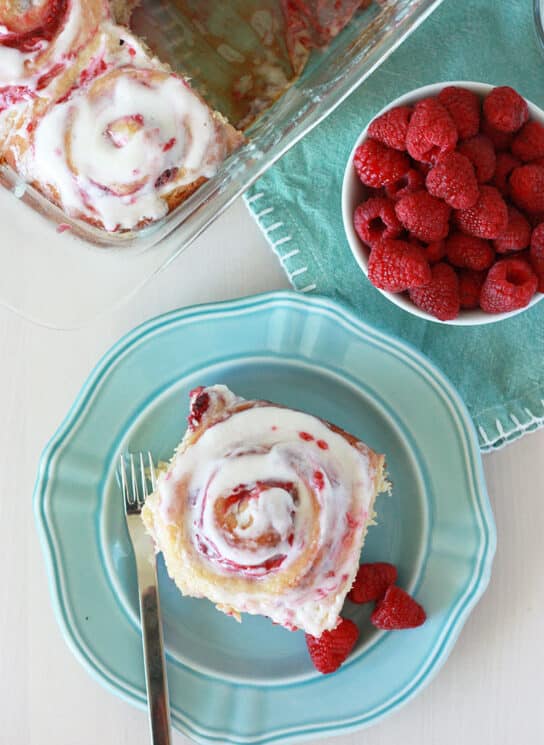 For this recipe, let the dough rise twice. The first time you should let it rise for 1-2 hours or until it’s twice as big. The time variable is based on the temperature in the place where you let it rise. If it’s a very warm environment, it’s almost an hour. If it’s a cooler environment, it will take almost 2 hours. Finding a warm place for it to rise in your home is a good idea.

The second rise is when the rolls are cut and in the pan. You let them rise again for 1-2 hours or until the buns are twice the size. The same idea applies to the air temperature on this rise as well. We 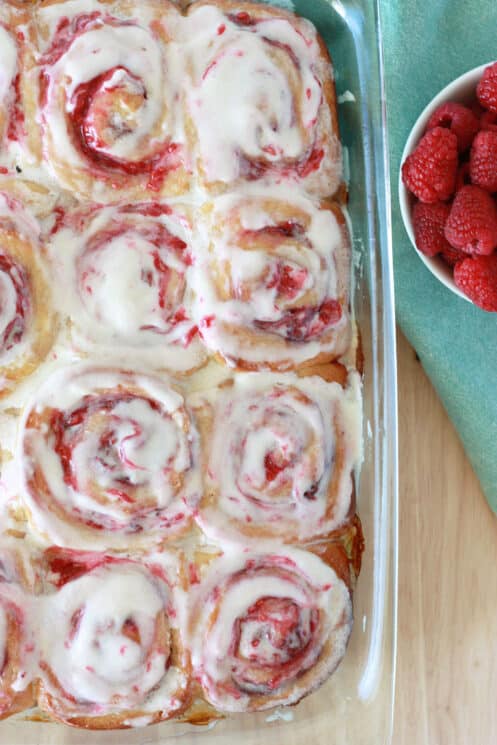 If you want to ice these up, most of the sugar will come from there. You can definitely use less frosting and still get the sweetness out of it.

These raspberry buns are the perfect recipe for special occasions – birthday breakfast, Christmas morning breakfast, Easter brunch …… ..I could go on! So next time you’re in the mood for a sweet bun, switch things up from traditional cinnamon and make these! 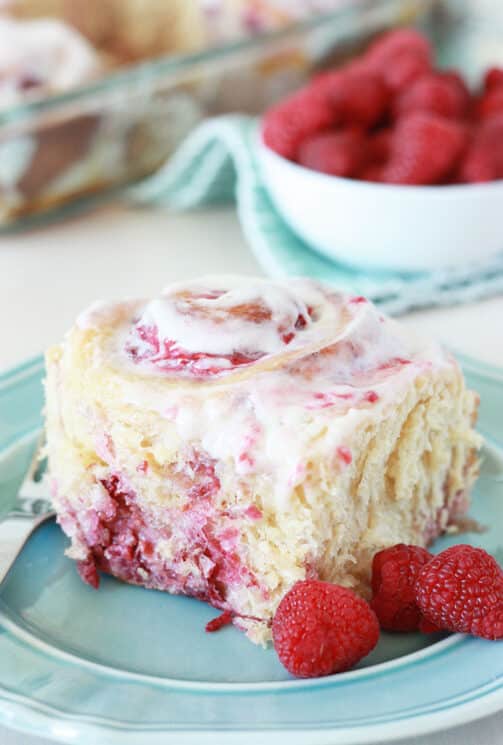 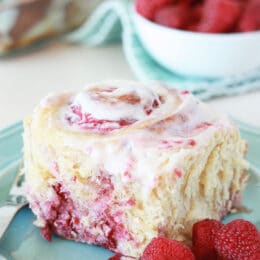 To start the batter, warm the milk lukewarm in a saucepan over medium heat. Pour the warm milk into the bowl of a stand mixer. Add the honey and yeast and mix for a few seconds.

Let the mixture rest for about 5 minutes until the yeast bubbles. Stir in the softened butter at low speed until it is easily broken. Next add the eggs and then the salt. Mix.

Gradually add the flour one cup at a time and mix. Once everything is added, mix on medium speed until a soft batter forms. Continue kneading until the dough is very soft and the gluten has really formed. This should take about 8-10 minutes.

Take the dough out of the mixer, shape the dough into a ball and transfer it to a lightly greased bowl. Cover the dough and let it sit in a warm place for about 1 to 2 hours until the size doubles.

Spray the bottom of a 9 × 13-inch baking dish with cooking spray. On a lightly floured work surface, remove the dough and use a rolling pin to roll it into a 12 × 18 inch rectangle. You should make sure the dough is evenly thick so that all of your buns are nearly the same size.

Next, do the filling. In a medium-sized bowl, gently mix the frozen raspberries with the sugar and cornstarch until coated. Spread the mixture evenly over the dough.

Start at one of the short ends and roll the dough into a firm roll. Cut into 12 even slices. Arrange them in the prepared baking pan, cut the sides up. Cover the buns and let them rise in a warm place until they have almost doubled in size. This takes 1-2 hours, depending on how warm your house is. The berries release their juice at the bottom of the pan – this is supposed to happen and will soak into the buns during baking.

For the icing, mix the powdered sugar and cream in a small bowl until smooth. You can use milk instead of cream if you want. Add more liquid or powdered sugar depending on how thick you want the icing to be. Coat the rolls with glaze while they are still warm. Enjoy!